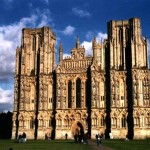 A 68 year old woman had to be airlifted to safety from the dizzy heights of Wells Cathedral in Somerset recently after taking a guided tour of the building.

The pensioner had been taking part in a 'high parts tour' of the historic monument when she fell 30ft and became wedged between two turrets.

It is not clear how the woman took the tumble and although her injuries weren't thought to be life threatening, it is believed that she was treated for shock an suffered damage to her leg, arm and hip.

When the hapless pensioner climbed the famous staircase of Wells Cathedral. little did she know her salvation would come from the sky in the shape of an RAF Sea King rescue helicopter.

Three and a half agonising hours after her fall, the pensioner was winched to safety by paramedics, after she was carefully placed on a spine board by a doctor who literally dropped in to assess her injuries.

The incident was thought to have happened during the final stages of a guided tour of the 775 year old cathedral with a party of 11 other sightseers.

During a briefing of the 'high parts' it is understood that the woman fell and became wedged 150ft in the air between two turrets inside the bell tower.

The cathedral's emergency procedure was quickly put into place and Devon, Avon and Somerset rescue services dashed to the scene before the helicopter was scrambled from RAF Kinloss in the north of Scotland.

Enjoying incredible views across the Glastonbury Tor and Somerset levels, visitors don't usually hitch a ride back down from Wells Cathedral but the high flying pensioner got the ride of her life as she got a birds eye view all the way to Bristol's Frenchay Hospital.

If you have been injured and need our advice and support to make a claim, contact our team now on 0845 603 0708.  Or contact us on answers@nationalsolicitors.com.

We're more than just a law firm. We are a solicitors practice dedicated to our local and nationwide clients and their legal needs.

Personal service when you need it most coupled with professionalism and dedication that will ensure you continue as client for many years to come !