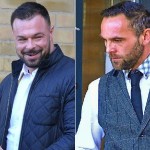 Shrewsbury Crown Court heard that a fireman persuaded his friend to take a DNA test so that he could avoid paying child maintenance.
The court heard that Simon Jordan, 33, from Bridgnorth, Shropshire, asked Jason Lee Coles also from Bridgnorth, Shropshire, to provide a sample of his DNA, when a woman named Jordan as the father of her child.
In a bid to avoid paying child support, Jordan arranged for both men to attend Broseley Medical Centre on Aug 24 last year and Coles, 40 used Jordan's photographic ID and provided a false statement.
The test proved negative and it was then that the CSA requested further checks.  The child's mother was insistent that Jordan was the father and discovered that the test had been falsified.
The Child Support Agency (CSA) stated that enforcement action was under way and that Jordan owed £16,000 in Child Support Agency payments and had not paid "a penny".
When passing sentence, Judge Peter Barrie told Jordan "You knew full well that a test that would support your paternity would result in support payments. This was clearly financially motivated and an attempt to de-rail support of a child.  You did it by persuading your friend Jason Coles to take the test for you.
Jordan admitted conspiracy to commit fraud between July and August 2017.  He was fined £2,000 and received a 12 month suspended sentence, 200 hours of community payback and 15 rehabilitation activity days.
Mr Andrew Holland, mitigating for Jordan said that, "he accepts it was an utterly foolish thing to get his friend to take the test for him".
His co-accused, Coles, 40, a tree surgeon, also pleaded guilty to the offence and was given a six-month suspended sentence and 200 hours of unpaid work.
Should you wish to discuss any legal matter please don't hesitate to contact our Altrincham based legal team.
Collings Solicitors
Altrincham