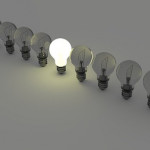 In a move that will affect nearly a third of all lights sold every year halogen bulbs are to be banned in homes in the UK.
Following an earlier ban on regular incandescent bulbs, sales of small halogen bulbs - typically used in spotlights and security lights - will be phased out from September as Britain adheres to EU climate change regulations. Under the new legislation, halogen pin bulbs - used in small fittings including wall lights, and fluorescent strip lights - such as those used in offices, will also be banned from sale from 2023. Retailers will be allowed to continue selling their existing stock until it runs out.
In a move which could help stop 100,000 tons of electrical waste every year, electrical equipment or fixtures with inbuilt lights that cannot be easily replaced will also be banned from September. It is hoped that the changes will save 1.26 million tons of CO2 by 2030, the equivalent to taking half a million cars off the road.
LED bulbs cost slightly more, but provide savings on electricity bills in the long run. All of the affected bulbs have LED equivalents, although replacements for halogen pin bulbs are currently not as bright, and some existing fittings might cause bulbs to flicker and require an electrician to remedy the problem. The Government will also relabel bulbs to "simplify" their energy efficiency rating, which runs from A to G.
The chief policy officer of the Lighting Industry Association, Peter Hunt, said: "The UK was actually pushing harder than most European governments for early phase-out of these inefficient lamps." The Minister for climate change, Lord Martin Callanan, said: "Flicking the off-switch on energy inefficient light bulbs is a simple way that households can save money at the same time as saving the planet."
A trustee of the Global Warming Policy Foundation, Steve Baker MP, said: "Banning these bulbs may or may not be a great step forward but I do hope that ministers made their own independent assessment of whether it was right for the UK."