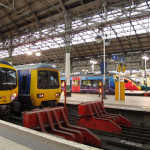 A railway worker has been awarded £25,000 at an employment tribunal after he was sacked for selling a ticket before he was trained to do so.
Mr Tony Trice, who usually manned the gates at Ashford railway station in Kent, sold a fare to a passenger despite having failed a test he was required to complete before using the machine to issue tickets.
In 2018, South Eastern launched an investigation after discovering that, when his colleague had left the office to buy a drink, Mr Trice issued a ticket.
At the tribunal in Ashford Mr Trice said that he apologised immediately at the time of the incident and added that he "was only trying to help out" while a colleague was away from his desk.
The rail operator suspended Mr Trice for "gross misconduct" and after a subsequent disciplinary hearing, dismissed him without notice. The panel found Mr Trice's had "misjudged" a situation and found his dismissal to be an "unreasonable response".
Speaking on behalf of South Eastern, a spokesman for the rail operator said, "We're very clear about the procedures that have to be followed with regard to handling money in our ticket offices, which is why we have a training programme with clear expectations about the standards required. We're reviewing our internal policies in response to the outcome of the tribunal."