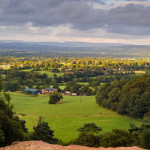 An affluent village in Cheshire is being plagued by high-performance car racing. In just one day thirty-three speeding drivers were caught speeding as they raced along a stretch of road into the village of Alderley Edge, Cheshire.
The area is home to TV stars including the presenter of 'Top Gear' Paddy McGuinness, and to many Premier League footballers, and is part of Cheshire's "Golden Triangle."
The motorists have been accused of holding organised meetings to race their vehicles with spectators filming their high-speed driving and wheel spinning antics to post on social media and YouTube. This has led to a host of complaints from residents to Police.
The local councillor who first raised the issue, Craig Browne, has posted on social media that the supercars and spectators are now back in greater numbers following a brief respite during the lockdown.
A "car meet" event was stopped in July after patrols prevented multiple cars from travelling to the village and now Cheshire East Council and Cheshire Police have asked local residents to take part in a survey of the issue stating that their inquiries, "will engage with local residents, businesses and visitors in the area including those who may be involved in the behaviour."
It is possible that people living in the area could be among those culpable for the racing. In a statement Police said, "We have been receiving increased reports concerning anti-social behaviour relating to performance vehicles travelling through and visiting Alderley Edge. While we appreciate this behaviour is only being displayed by a minority of individuals, it has however come to our attention that this is potentially having a detrimental impact on those visiting, residing and working in the area."
The force added that, in addition to presenting a "serious risk" to the public, the noise from excessive revving, "can be extremely loud and upsetting."