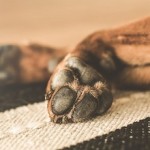 A Croydon man who beat his dog and failed to give her enough food and water has narrowly avoided a jail sentence.

The dog was discovered by police on July 14 after they were called to Zizzla's home. The dog, called Lacey, had a large cut to her head and was severely malnourished.

A vet found that Lacey's injuries had been caused by blunt force trauma, and police found a metal bar in Zizzla's property.

Prosecutor Kerry Lingard said that when police officers arrived at the address they noticed a "pungent smell" and rubbish all over the floor of the property. She continued:

"Lacey, a small brown dog, ran out and officers noted that the dog had a fresh cut to the top right hand side of its head. Its head was swollen and the cut appeared to be fresh and still bleeding. They also noted the dog appeared to be malnourished, as its ribcage was visible.

"There was rubbish everywhere and the dog was trying to eat from empty packets of biscuits on the floor.

"There was a rusty cage where the dog appeared to sleep, and a metal rod was lying on the floor."

Zizzla was sentenced to 12 weeks in custody suspended for 18 months, fined £200 and banned from keeping animals indefinitely.

If you are facing a criminal accusation, call our team for expert, confidential legal advice. Speak to us today on 020 8681 3999.