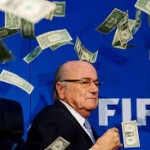 Football agent Guiseppe "Pino" Pagliara, aged 64, has boasted of handing over a gold Rolex worth £30,000 to Sir Alex Ferguson amid suggestions that soccer is rife with corruption.
As part of a newspaper undecover investigation Mr Pagliara said he had opened numerous Swiss bank accounts for football managers to provide "bungs" to secure player transfers.
At a hearing at Southwark Crown Court prosecutor Brian O'Neill, QC, said Mr Pagliara had set up meetings between Claire Newell, an undercover journalist posing as a businesswoman, and range of football personalities. The names referenced included Steve McClaren, the former England coach, Nwankwo Kanu, an Arsenal player, and Harry Redknapp, the ex-Spurs boss.
As part of meetings held in London, Leeds and Manchester Mr Pagliara was recorded telling Ms Newell how he would "look after managers". He also added that "99 per cent of the industry is made up of people that, if they weren't in football, would be selling second-hand cars".
In one extraordinary recording Mr Pagliara launched a "diatribe" against Sir Alex Ferguson in which suggestions were made of match fixing. The implication was that a match between Manchester United and Juventus, a club Pagliara was associated with, had been subject to corruption. And in return Sir Alex was presented with a £30,000 Rolex watch.
Mr O'Neill commented that, "Pagliara accused Alex Ferguson as having taken money as part of transfer deals saying he would only work with agents used to sharing money with him. He claimed he had paid Ferguson before."
Mr Pagliara, from Bury in Greater Manchester denies two counts of paying and facilitating a bribe.
Should you need support with any legal matter please do not hesitate to contact us for support.