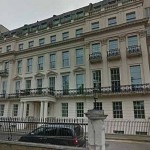 A large property overlooking Hyde Park is soon to be one of the most expensive purchases in the UK after a sale was agreed for the princely sum of £210 million pounds.
The 45 bedroom property has seven storey's and is soon to be bought by a Chinese billionaire. This gentleman is considered to be a property magnate and his holdings include the "Cheesegrater" buiding in the heart of London.
The sale eclipses the previous record for a property in London which stood at a lowly £140 million. This latter purchase has been taken to be a sign that confidence is returning to the property market following the Tories December 2019 victory.
The Glentree International Managing Director, Trevor Abrahamson, said, "I would describe before Dec 12 as BC and post Dec 12 as AD".
Post 2000 the residence has been owned by the Saudi royal family serving as their London home. Upon the death of Sultan bin Abdulaziz al-Saud, the crown prince, in 2011 his son has been trying to sell the property since 2015.
Built in the 1830's it was originally four town houses and it was subsequently remodelled in the 1980's. It offers grand state rooms, several passenger lifts, swimming pool, health spa, gymnasium, underground parking and 68 bulletproof windows.
Should you need support with any legal matter please do not hesitate to contact us for support.