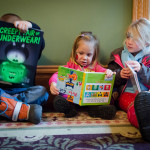 State not pushing enough for improvements for children in care

A landmark report has found that the state is failing to be a "pushy enough parent" in bringing up children in care.
The independent review of children's social care published its first findings, which show that the UK has "failed" to create loving relationships for children in the care system. It is estimated that a quarter of children in England will have had a social worker before their 16th birthday. In what was described as a "staggering misuse" of staff, the review found that one in three social workers in children's services does not work directly with children or their families, and found that the system "particularly fails teenagers who face harm outside of the home" and that "many experience serious harm or die."
There are currently more than 80,000 children in the social care system, the report found that the state is not being a "pushy enough parent" for those children, in making sure they get access to the support they need.
A former teacher who is leading the review, Josh MacAlister said: "Our children's social care system is a 30-year-old tower of Jenga held together with Sellotape: simultaneously rigid and yet shaky. "There are many professionals and services doing excellent work but this report sets out the scale of the problems we face and the urgent need for a new approach. "Improving children's social care will take us a long way to solving some of the knottiest problems facing society – improving children's quality of life, tackling inequalities, improving the productivity of the economy, and truly levelling up."
The findings came as the Government announced £16 million in funding to provide children in care with more access to social workers who can help boost their attainment. The review, announced in January by the Education Secretary Gavin Williamson, says that the state – from central government to local authorities, police and schools – has failed to keep children in its care safe.  "Government departments and safeguarding partners have failed to have an effective response to the risks that teenagers face," it says. The review also found that the system had failed to prioritise or create loving relationships for the children it looks after, stating: Children are "moved far from where they have grown up, are separated from their brothers or sisters, are forced to move schools, and have a revolving door of social workers. "We are failing to build lifelong loving relationships around these children."