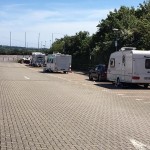 Allegedly a group of "travellers" demanded a £1,500.00 ransom from a Premiership Rugby Club in order to vacate their stadium car park. The group set up camp in the car park and moved two caravans, a motor home and three other vehicles onto the site.
Club Officials confronted the travellers and were told that they wanted a cash sum in order to leave. The suggestion is that the travellers were aware that the cost of an eviction order equated to £1,500.00
The Chief Executive, Tony Rowe, of the Exeter Chiefs commented that the travellers were seemingly using the amount as a bargaining mechanism to speed up their departure from the car park.
Mr Rowe said, "They know the law and that because it's private land it will take 48 hours to obtain an order to remove them which will cost us £1,500. I would rather pay for the order. If you pay them cash directly they will come back as they'll think you're a soft touch."
The club stated that the travellers made threats to club officials prior to them contacting the Police.
The travellers were evicted within 24 hours after an enforcement order was obtained via a company in the Midlands.
The Chief Executive further commented, "They were a bit aggressive and threatening when they left and they threatened to come back. Considering they were only on site for less than 24 hours they left a ton of mess which we have cleared up. What they left was disgusting."
Should you need support with any legal matter please do not hesitate to contact us for support.