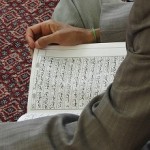 An Islamic community centre has been targeted by vandals following the recent terror attack at London Bridge and Borough Market on Saturday.

Worshippers visiting the Sutton Islamic Centre on Oakhill Road, near Sutton town centre, on Sunday morning discovered vandals had spray painted "terrorise your own country" on the building.

The vandals also painted the words "go away" in black spray paint on the centre.

Police attended the Centre on Sunday morning, and are treating the incident as racially motivated criminal damage.

A spokeswoman for the Metropolitan Police said:

"Police in Sutton have completed a report for racially aggravated criminal damage after a mosque in Oakhill Road was daubed with Islamophobic graffiti on Sunday.

"No arrests have yet been made. Reassurance patrols are taking place throughout the borough."

The incident has occurred during the Islamic holy month of Ramadan, which began on Friday May 26, and will end on Saturday, June 24. Ramadan is observed by Muslims around the world as a month of fasting and prayer.

If you need assistance with a criminal damage allegation, call our team for confidential legal advice. Speak to us today on 0208 681 3999.