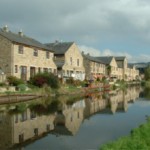 A developer has won his appeal to build 62 new homes after initially being rejected by Bradford Council despite recommended approval.


Despite planning officers recommending approval for the 62 homes outlined for the fields off Bolton Road, Silsden, the application was rejected by Bradford Council's regulatory and appeals committee in April earlier this year. However, concluding that any adverse effects would not outweigh the benefits of a substantial amount of new homes, government inspector David Cullingford ruled in favour of the applicant.


"There is a compelling need to identify suitable housing sites to redress the identified shortfall, not just to provide the housing that the district needs, but also to avoid undermining prospects for regeneration, or exacerbating problems of overcrowding or adding to the long waiting lists for social housing.

"In that respect, this scheme would provide 20 per cent of the 62 dwellings as affordable homes."


Craven ward councillor Adrian Naylor said he wasn't surprised by the planning inspector's decision to approve the application for 62 new homes but was saddened that the development would be built on green belt land.


If you're looking to buy, sell or remortgage a residential or commercial property, contact our property solicitors on 0845 603 0708 for advice.