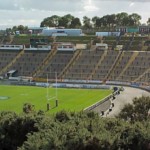 A former rugby player has been compensated by Bradford Bulls following the cancellation of a three-year deal after he suffered a training injury.


Danny Sculthorpe, 35, suffered a prolapsed disc after the Super League club failed to devise a suitable training programme following Sculthorpe's spinal surgery and history of back problems. Despite warning both the club doctor and physio he was instructed to do 60kg 'bent over rows' at one of his first training sessions, which ended in the injury.


"This case was never about the money for me, it was about Bradford admitting their mistakes and that they let me down so badly at a time when my career was going very well.


"They failed to devise a training regime for me to ensure my back condition was managed as it had been elsewhere, and then when I was injured, they abandoned me completely."


After the incident, Sculthorpe attempted to return to the sport but was unable to continue due to the pain. He now works for the sport in supporting the State of Mind charity, which aims to improve the mental health, well-being and working life of rugby league players.


If you've suffered after a sporting injury and want to claim compensation, contact our personal injury solicitors on 0845 603 0708 for advice.