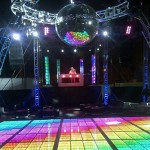 A charity worker at Cancer Research UK is suing the firm for upto £300,000 in compensation after an incident on the dance floor during a Christmas party.

Sandra Shelbourne, a 61 year old employee, sustained back injuries whilst allegedly being manhandled on the dance floor at the hands of a visiting Cambridge University scientist who dropped her.

The incident happened in 2012 and Mrs Shelbourne has been unable to return to work since the injury. The scientist had been drinking spirits, including vodka, wine and beer, and had picked up three other women prior to hoisting Mrs Shelbourne aloft.

This matter reached the High Court after previous attempts to force a financial settlement through the County Court failed.

Cancer Reasearch UK had stated that an expectation that Christmas parties should be monitored and policed would most likely be treated as health and safety gone mad by "the ordinary man".

The preciding judge stated that the scientist would, "clearly be liable to Mrs Shelbourne in damages for trespass to the person and negligence" but added a further comment by saying that the claimant was not suing the scientist directly.

The court has yet to deliver it's judgement to this point on the culpability of the charity and their responsibility for the injury.

If you require confidential, legal advice call our team of specilaist solicitors on 01942 366 388