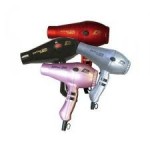 A salon owner was forced to phone 999 recently when a row with a customer escalated over a bad hair colour, resulting in five police officers rushing to the scene.

Suzanne allegedly arrived at the salon with her hair in poor condition.  According to hairdresser, Hafiza O'Connor, it was badly burned from the Henna and red, brown and blonde.

Speaking in a Daily Mail article, the Blackburn stylist said, "It's actually cost us money to do her hair.  It's a disaster because of the Henna she has used.  She had brown roots, very dark red in the middle and blonde ends".

Stylists allege that the client had tried to haggle with them over price throughout the treatments and initially didn't show for her second appointment the following day, saying that her hair was falling out and refusing to pay the £107 bill.

When the client eventually returned, the row over payment escalated and worried salon employees called the police.  Five officers attended and tried to negotiate with Mrs Zahran and salon owners.

As no satisfactory agreement could be reached, police concluded that it was a civil matter and should be settled in court.

If you are thinking of litigation, we can take your case to court.  Contact our lawyers on 0845 603 0708 or email answers@nationalsolicitors.com.

.... based on the fact that we're a friendly, professional firm that won't tie you up in jargon.

We offer a straight forward, cost effective service, from a team of experienced solicitors...

Whether you need Conveyancing, Litigation or Employment support in Smethwick, Birmingham or nationally, please call us !