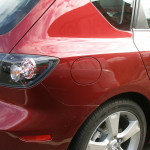 Driver got £20k fines after number plates were cloned

A driver who advertised her car online was sent £20,000 of fines after her number plates were cloned.
Claire Herron, from Hartlepool, advertised her Mercedes for sale on Gumtree. She reported the fact that her number plate had been cloned to the authorities, but because she did not suffer financial loss and her identity was not used to steal, it was not deemed a crime.  Ms Herron received notifications that motoring offences across almost every London borough were recorded against her, and was hit with fines, congestion charge demands, the threat of arrest warrants, and even the arrival of bailiffs demanding money.
A victims' organisation has called for the law around identity theft to be reviewed, as legally the councils and companies issuing the fines are considered the victims.
Ms Herron received the first fine - for using a tunnel outside London - in Easter 2018. "There was a photograph of a car that looked like mine with my plate on. It wasn't my car and I hadn't been in London," she said. "I contacted Transport for London and was told it would get sorted out, but it didn't, and that was just the start of a very long nightmare. The fines just kept coming and coming – parking charges, speeding notices and demands from nearly every borough in London. Bailiffs demanding £1,200 even visited Ms Herron's 80-year-old mother at her shop.
The Victim Care and Advice Service offered support to Ms Herron, which saw the bogus number plate entered into an automatic recognition system and the car eventually tracked. The bailiffs refunded her money.
Ms Herron said: "I was on the edge of a nervous breakdown and I started to panic; this was quite sinister, and what if whoever had cloned my plates did something really serious like killing someone in a hit-and-run? "It really started to impact my mental health; I reached a point where I physically couldn't open my post anymore."
Dave Mead, of the Victim Care and Advice Service, said: "Legislation hasn't kept pace with identity theft, fraud and cyber-crime and we'd like to see a root and branch review of how this works. "Thousands of people are really suffering financially and emotionally."

As a law firm we are dedicated to the needs of our private and corporate clients.

At the same time we recognise the needs of the wider legal community and are able to work with consultants across a range of disciplines.