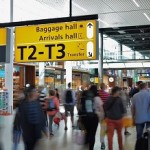 Two counter-terrorism detectives have been sacked for skipping night duties during shifts at Manchester Airport.

Constables Jason Coman and Jennifer Gold were supposed to be checking passenger lists and intercepting any potential terror suspects. But they were found to have spent "extended periods of time" in their office during four night shifts in July 2016.

Following an internal investigation the pair were both dismissed for gross misconduct. The probe found that the two North West Counter Terrorism Unit detectives lied in giving "inaccurate and misleading" information about not leaving their office.

They appeared before a panel on December 18 last year and were dismissed for their behaviour.

"The panel was independently chaired and the chair ruled that the hearing would be held in private to prevent Counter Terrorism tactics being revealed.

"At the conclusion of the hearing, the panel found the officers had breached the standards of professional behaviour and that their actions amounted to gross misconduct.

"Both were dismissed from the force without notice.

"GMP considered the actions of the officers to be totally unacceptable which is why the force sought the highest sanction from the panel."

If you need legal assistance with any kind of employment matter, call our team for expert advice. Speak to us in confidence on 01942 366 388.