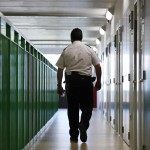 A study has revealed that Wales has the highest rate of imprisonment in western Europe
A Factfile found that in 2017 (the latest figures available) there were 154 prisoners per 100,000 of the population of Wales, compared with 141 per 100,000 of England.
Following these findings academics and campaigners have expressed their concerns, Plaid Cymru said they showed the penal system was failing and that they added weight to the argument that criminal justice in Wales should be devolved to Cardiff.
It is widely accepted that England and Wales jointly have the highest imprisonment rate in western Europe but this is the first time the figures for each country, which share a legal system, have been analysed separately.
The research was carried out by Dr Robert Jones at Cardiff University's Wales governance centre. He said the figures were worrying but any suggestion that judges and magistrates in Wales were inherently harsher than those in England could not be determined until full sentencing data was further broken down.
Jones said: "The findings pose a number of significant questions and raise many further difficult issues. Wider research is needed to try to explain Wales' high rate of imprisonment. While this will undoubtedly include further analysis of sentencing outcomes including the use of community sentences, fines and suspended sentences, attention should also be drawn to the significance of wider socioeconomic factors in Wales.
"In particular, the data should be considered in light of Wales' status as one of the poorest parts of the UK. Previous research has identified the symbiosis between poverty, marginalisation and imprisonment."
Plaid Cymru's Westminster leader Liz Saville Roberts, said the figures showed the prison system was not fit for purpose.
"Just locking people up does not solve the problem," she said. "We need a genuinely rehabilitative prison system to break the vicious reoffending cycle that many inmates fall into. For the safety of prison staff, inmates and society as a whole we need to make rehabilitation our number one priority.
"Wales being at the top of this league table is a source of great shame. Our national assembly for Wales should take control of our prison system so we can create one fit for the unique needs of our nation and not simply allow Westminster to impose its unsuitable policies."
The study, which was published on Wednesday, used the home addresses of offenders to differentiate between Wales and England. It found a higher proportion of Wales's overall population was in prison than England's for every year since 2013, when data became available.
This trend was supported by the "in country" rate of imprisonment. In November 2018, the rate in Wales was at 148 per 100,000, compared with 141 per 100,000 in England. The Welsh rate is expected to increase once HMP Berwyn in Wrexham becomes fully operational.
The study also showed that while the total number of custodial sentences handed down by courts in England fell by 16% between 2010 and 2017, it increased marginally (0.3%) in Wales. This was despite police recorded crime in Wales being lower than in England every year between 2013 and 2017, the report said.
A spokesman from the Ministry of Justice said: "As we have said previously, the prison population is too high and we are exploring potential alternatives to custody – such as reducing the number of ineffective short sentences which provide little opportunity to rehabilitate offenders and fail to tackle reoffending. We are clear that prison will continue to be the best place for serious offenders."
The Welsh government deputy minister Jane Hutt who is responsibility for crime and justice policy, said: "The report is very timely; its findings will assist us in establishing a clearer picture of sentencing and custody in Wales which will influence our future work around offending.
"The report highlights the differences in sentencing between Wales and England and the importance of Wales-specific data in understanding justice policy and practice.
"Whilst justice remains a non-devolved function, work is underway to get the best possible solution for Wales. Working with the Youth Justice Board Cymru and HMPPS [the UK government prison and probation service], we are developing proposals on how a distinct and different justice system would operate specifically for female and youth offenders in Wales. Early intervention and prevention are key - considering how we can divert people away from crime in the first place in a holistic and rehabilitative way is essential to Wales' future outlook."
If you require confidential, legal advice call our team of specilaist solicitors on 01942 366 388