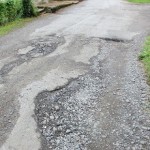 The 10 roads in the borough which have led to the most complaints about potholes can be revealed.

Top of the list was Poolstock Lane, in Poolstock, which was the subject of 26 complaints to Wigan Council in the year 2016-17. Close behind were Back Lane, in Appley Bridge, and Golborne Road, in Ashton, which each attracted 20 complaints.

The data comes thanks to a Freedom of Information request submitted by the Wigan Observer.

Council bosses say 1,000 fewer defects were identified compared to the year before, and figures continue to fall thanks to increased investment in road repairs.

"Of course we recognise there are some roads in the borough which are more susceptible to defects than others for a variety of reasons and we are pleased that residents regularly report potholes to us so we can address problems quickly and efficiently.

"By having easily accessible reporting systems in place such as the Report It app we have made it much easier for residents to report issues to us including potholes and other road related enquiries."

If you have been injured on the roads and another individual was to blame, you may be entitled to compensation. Call our claims team on 01942 366 388 to find out more.