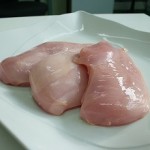 The country's largest supplier of supermarket chicken has suspended production at one of its main processing plants after undercover filming revealed poor food safety practices.

The temporary closure by 2 Sisters Food Group (2SFG) comes as Tesco joined the boycott of the group's West Midlands plant in the wake of a joint undercover investigation by the Guardian and ITV News.

Undercover footage shows 2 Sisters workers altering the source and slaughter date of the poultry being processed, in order to artificially stretch the commercial life of the meat.

Other footage, which was filmed in august, showed chicken being picked off the floor, and older poultry being mixed with fresher birds.

A spokesman for 2SFG said:

"The Food Standards Agency (FSA) has been in daily attendance since the allegations were raised and confirmed that it has not identified any breaches. However, our internal investigation has shown some isolated instances of non-compliance with our own quality management systems.

"We have therefore decided to temporarily suspend operations at the site to allow us the time to retrain all colleagues including management in all food safety and quality management systems."

If your health has suffered as a result of dangerous or defective goods, you may be entitled to compensation. Call our Sutton Coldfield team on 0121 355 4700 to see if you might have a claim.