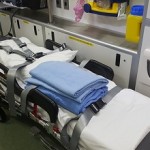 Three ambulance staff were injured on Wednesday night by the very people they were trying to help.

The first incident happened at around 9pm on Wednesday September 7, when an ambulance crew was called to treat a 23-year-old man who had been injured in a fight in Newcastle, north Staffordshire.

While paramedics treated the man for head injuries in the back of an ambulance, he became aggressive and caused injuries to both staff. One paramedic suffered a fractured hand, and a technician sustained facial injuries.

The same night, a separate ambulance crew was called to attend to a 56-year-old man who was suffering breathing problems at an address in Lichfield.

During the journey to Burton Queens Hospital, the patient became agitated and assaulted a technician, leading to facial injuries.

"It is hugely disappointing that yet again our staff, who are there to help people in their hour of need, have once again become patients themselves.

"The trust operates a zero tolerance policy against violence towards our staff and we will be doing everything in our power to help police prosecute these individuals."

If you have been injured at work and somebody else was to blame, you may be eligible for compensation. Call our team on 0121 355 4700 to discuss your circumstances.