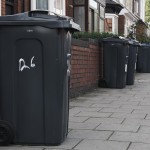 Birmingham will see its bins being collected once a fortnight as Union members ready themselves for walkouts. The background scenario appears to be centrered around a dispute betwenn the GMB Union, the Unite Union and Birmingham Council.

Members of the Unite Union have been working to rule since 29 December as a consequence of monies paid to GMB members, and intend striking twice a week from mid February.

As such Birmingham City Council plan to reduce the weekly bin service to a fortnightly service as it aims to resolve the dispute.

Local councillors plan to take out an injunction "to prevent further unlawful industrial action". Unite's assistant general secretary Howard Beckett said: "The terms of settlement proposed now by Birmingham council are worse than the unacceptable terms previously on offer. Under those circumstances the talks collapsed immediately and, given the attitude of the council, there is little prospect of further talks taking place in the near future."
Unite representatives have said that negotiations have broken down and its members will begin strike action on 22 February. Unite is seeking its own High Court injunction against the council on Wednesday, with the intent to prevent the 2017 agreement being breached.
Councillor Brett O'Reilly said: "There is an offer on the table, if we can't come to an agreement by midnight tonight, as was set out in the cabinet meeting this morning, then we will have to seek an injunction from the High Court tomorrow. If the judgement is in the favour of the council we will have to take the offer off the table."
Furthermore Birmingham City Council have commented that from March residents should put both bins out on what would be their normal recycling collection day, and that a reasonable amount of "side waste" can also be left.
At present a number of local authorities, including Wolverhampton, operate a fortnightly bin collections as standard.
Active Legal
Birmingham
0121 355 4700