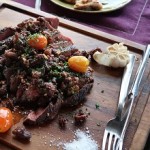 A restaurant has been fined £50,000 by magistrates for serving food on "unhygienic" wooden boards that could not be effectively cleaned.

Inspectors initially visited the restaurant in October 2016, and raised a number of concerns about cleanliness.

Although some improvements were made, on a return visit two months later, they found the boards were still in use.

At Birmingham Magistrates' Court on Thursday, the restaurant admitted that it had failed to comply with a hygiene improvement notice by continuing to use the wooden plates.

The council said inspectors were originally called to the restaurant on Warwick Road after an alleged food poisoning outbreak that affected a party of 14.

The council says the boards were "incapable" of being cleaned. As well as the fine, the restaurant must pay £670 costs and £120 victim surcharge.

Mark Croxford, head of environmental health at the council, said:

"It is completely unacceptable for businesses to put the health of people eating at their restaurants at risk."

If your health has suffered and another individual was to blame, you may be eligible for compensation. Call our claims team on 0121 355 4700 for more information.