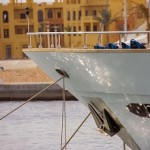 A Birmingham tourist nearly lost her leg after her calf muscle was ripped off in a horror boating accident in Australia.

The 53-year-old was on a two-day cruise with her husband around the world famous Whitsunday Islands in Queensland when the freak accident occurred on Saturday.

The unnamed woman was on board the 24-metre luxury yacht the British Defender, when she became entangled in a rope.

She was pulled along the boat's deck and smashed into handrails and equipment before being dragged across high-tension steel wire which ripped the skin, flesh, and muscle off her lower left leg.

Paramedics gave her pain relief on the deck of the boat before transferring her to a rescue helicopter. She was then airlifted to Mackay Base Hospital, where she remains in a stable condition.

"It was not something our crew had ever come across before.

"The call initially came through as an amputation but it later transpired the woman had suffered a bilateral degloving injury down the left side of her leg.

"It is an awful situation for this lady to be in and our hearts go out to her. It's horrible and we hope she makes a full recovery."

If you have suffered an injury abroad, you may be entitled to compensation. Call our holiday accident team on 0121 355 4700 to find out more.