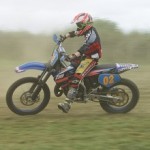 An emergency responder from Sutton Coldfield has warned that dangerous bikers are 'tearing up the community' and putting lives at risk because of their reckless riding.

Ben East, who volunteers as a West Midlands Ambulance Service community responder, has expressed concern that off-road bikers are causing havoc in the town by riding on the wrong side of the road, on pathways, and through parks.

Mr East has also criticised the lack of police response to the issue, expressing frustration that police were carrying out speeding operations but not targeting the off-road biker issue.

"The message to off-road bikers is very clear: enough is enough. We have been patient and tried to speak to those involved to warn about the dangers of their actions – but such unacceptable behaviour must now stop.

"There is a huge amount of work going on across West Midlands Police into tackling this menace on our communities.

"But we need the help of our communities to tell us who is responsible so we can find them and take them to court."

If you have been injured on the roads and somebody else was to blame, you may be owed compensation. Speak to our team on 0121 355 4700 for more information.