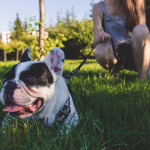 Dog-sitter bites back at rival in court case

A dog-sitter is taking the manager of a rival business to court over allegations he deliberately left false reviews of his business on Google.

Oliver Sciota, who charges up to £13,000 a year to look after pets, said the comments severely damaged the reputation of his London-based company, For Dogs' Sake.

He claims false allegations were made on social media about staff being seen to "punch and smack dogs", which led to "terrible comments" and "one-star negative reviews" posted on Yell and Google.

The 38-year-old is suing Doggieville Pet Services, in Hampshire, and his former employee Adam Tanner. According to court documents, the comments were initially posted by Mr Tanner on Instagram in October last year. He said: "Lovely dogs horrible staff … Something needs to be done about this … I just feel so bad for these babies … This should've been my dream job but it turned into my worst nightmare."

Mr Sciota is seeking damages of £10,000 from both Mr Tanner and Doggieville's manager, Hollie Colenutt. In court papers, Mr Sciota said: "One-star negative reviews can destroy any type of business, but in particular when dealing with a dog-related business it can potentially end it completely."

He also said the "trolling" had placed "immense strain" on his firm's plans to expand. Both parties deny liability, with Mr Tanner saying his comments were "an honestly and reasonably held statement of opinion."

In a written defence, Mr Tanner "vehemently rejected" the suggestion that there was a plan to ruin the reputation of For Dogs' Sake, while in Doggieville's defence Ms Colenutt denies leaving a negative review on Yell or Google, insisting that she was not the author of the comments.