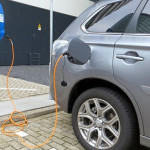 Every new building to have electric car charger

The Government has announced that electric car charging points are to be installed at every new home and office.

Transport Minister Rachel Maclean said that legislation would be brought forward this year to accelerate the rollout of charge points across the country. The announcement comes as the Government tries to dramatically increase the number of charging points available, ahead of its' 2030 ban on the sale of new petrol and diesel vehicles.

The minister also confirmed that to prevent the electric grid from being overwhelmed by thousands of people all plugging in when they get home from work, all new charge points will have to have "smart charging" technology.

The government originally announced in 2019 that it had proposals to mandate all new homes have a charge point "with an associated parking space". The plans also stated that new office blocks will need to install a charge point for every 5 parking spaces.

The smart technology the charging points will be required to have will calculate for the best time for the car to charge while it's plugged in, and to avoid big surges on the national grid, will aim for off-peak times.

The Competition and Market Authority (CMA) warned earlier this year that if the government is to encourage drivers to switch to the more environmentally friendly vehicles by 2030, finding a place to charge electric vehicles had to become "a lot easier". The regulator added that the biggest stumbling block to motorists adopting the new technology is "range anxiety" – the fear of running out of charge mid-journey.

The UK currently boasts around 25,000 public charging points, and government grants of up to £350 have been used to install another 200,000 at private homes.  However, with around 32 million vehicles currently on the UK's roads, experts say that many more chargers will be needed to achieve the government's target of phasing out petrol and diesel cars.

The CMA predicted in its report that that around 10 times the current number of charging points will be needed to make the network viable for significant numbers of electric cars.