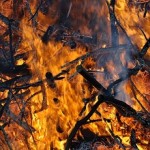 Family's Fury as Hover Board Bursts into Flames

A dangerous hover board bought as a Christmas gift has exploded into flames and gutted the family-of-six's home.

Clare Happe, 32, said she wishes she had never bought the unbranded, £185-board on Facebook. Clare and her partner Charlie Heatley, 25, forked out a total of £555 for three identical hover boards from the same seller.

Ms Happe said the family had lost everything in the New Year's Day blaze and stressed that the family could easily have been killed.

"To stand outside and watch everything you worked so hard for just go up in smoke was awful.

"There was a loud explosive bang. They [the children] all started screaming when I told them the house was on fire."

Clare and Charlie have now thrown away the identical hover boards they bought from the same seller. The couple has vowed to never buy electrical items from Facebook again. They also say they intend to take legal action against the seller.

A spokesman for the London Fire Brigade confirmed that the fire was sparked by 'faulty electrical equipment.'

The drama comes after hover boards have been caught up in a series of safety scares over the last three years.

If your health has suffered as a result of a faulty or defective product, you may be entitled to compensation. Call our claims team in complete confidence on 0121 355 4700 to discuss your circumstances.