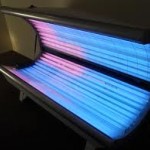 When a Hartlepool mum rented a sunbed to get a tan in preparation for a trip to Gran Canaria, she was horrified as the £80 machine burst into flames.

Christine Bradley rented the sunbed from a local salon and claims that she is lucky to be alive after the tanning device turned her home into an inferno.

Two appliances from Stranton Station were sent to Christine's home when the fire broke out on Saturday afternoon and fire chiefs admitted that she was 'very lucky'.

Telling Mail Online reporters that she will never again use a sunbed, Christine who was hoping to get a golden tan ahead of her Spanish holiday instead found herself with £1,000 worth of damage to her home.

Having been laid on the sunbed for just five minutes, Christine told of her horror when the heat of the bed on her skin became so intense that she had to jump off.

"Normally they take time to warm up, but this one didn't.  It was really quite hot straight away.  I went to get a towel, the next thing I looked up and flames were coming from the top of it.  If I'd been on five minutes later, I would have been dead".

Fleeing to her neighbour's house in terror wearing just a dressing gown, Christine dialled 999 as the blaze spread across her home.

As the owners of the Golden Brown tanning salon declined to comment about the fire, Christine faces a bill to replace the entire contents of her holiday wardrobe, not to mention the TV, window, curtains and smoke damaged décor and carpets.

If you have been injured and it wasn't your fault, contact our lawyers for advice on 0121 355 4700 or email info@activelegal.co.uk today.