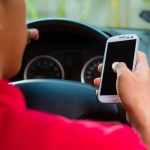 Experts are blaming the popularity of the Smartphone for a sharp increase in deaths on Britain's road this year according to a report in the Daily Mail.

With a 13 percent rise in fatal accidents reported in the first three months of this year in comparison to figures published during the same period in 2013, the rise of the 'selfie' is also under fire.

A third of young drivers admitting to taking a photograph of themselves while at the wheel.  This dangerous craze is highlighted in a survey by the Ford Motor Company who claim that a 'selfie' potentially distracts the driver for 14 seconds.

Perhaps more terrifying, the survey also shows that checking social media whilst driving can take the drivers eyes off the road for more than 20 seconds.  If a driver is travelling at 60mph, their car can potentially reach the length of five football pitches.

Ford interviewed 7000 young Smartphone users and according to the results, male drivers are the worst offenders.

From January to March this year, shockingly there were 380 deaths on the road.  If we add that figure to the number of people seriously injured, the total tops 5,500 in the first quarter.

As questions are now being asked about the increase in driver, pedestrian and cyclist fatalities, the finger is being pointed firmly at the Smartphone.

Traffic experts are also concerned about the numbers of drivers' texting while on the move, pedestrians not looking where they are going and drivers and cyclists sharing the same congested road space.

If you or a member of your family have been involved in a car accident, contact our Birmingham solicitors now on 0121 355 4700 or email info@activelegal.co.uk.