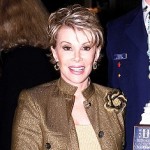 Joan Rivers remembers charities in Will

Caustic comedienne Joan Rivers, who died in September aged 81, has remembered several charities in her Will, it has been revealed.

The comic, who has left a fortune estimated to be worth around $150 million, has left an undisclosed amount of money to charitable organisations including God's Love We Deliver, Guide Dogs for the Blind, the Jewish Guild for the Blind, the Cystic Fibrosis Foundation, Jewish Home and Hospital Foundation, and the Simon Wiesenthal Center in Los Angeles.

Details surrounding the amount of money each charity received have not been revealed, due to the fortune being doled out from a confidential trust.

The filings say the comic's daughter Melissa inherited "all tangible personal property" from her mother.

Others who have been identified as receiving undisclosed sums of money include close friend of Rivers', Scott Curry, and assistants Sabrina Lott Miller and Jocelyn Pickett. It has also been reported that Pickett, who Rivers referred to as "like family", will also inherit an extra gift – Rivers' four rescue dogs.

If you need assistance administering the Estate of a loved one, contact our Birmingham probate solicitors on 0121 335 4700 or email us at info@activelegal.co.uk.