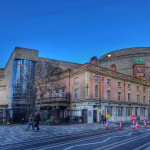 A Priory hospital has been accused by a father for failing its legal duty to safeguard his son after he "escaped" and was killed by a train.

Staff at the Priory Woodbourne told the father, Richard Caseby, that patients absconded, "all the time for drink, drugs or to meet friends". They added they were confident that his son, Matthew, 23, would return. However, he had jumped the fence when left unsupervised on September 7th, 2020.

Matthew, a personal trainer, was deemed a 'low suicide risk' by the Priory. His mental health had declined during lockdown, and unfortunately, he jumped in front of a Cardiff to Birmingham express train at 8:46am on September 8th, 2020. He was yards away from his father at the time. Mr Caseby had an obscured view of the railway line and did not see his son die.

An inquest heard Matthew had told doctors he was hearing voices, "receiving instructions" and did not trust himself. Mr Caseby, 61, said the Birmingham Priory and the NHS trust that sent him there, "had a basic duty under the Mental Health Act to keep our son safe. They did not".

Matthew was a first-class history graduate of Birmingham University and had not previously been diagnosed with mental health problems. In September 2020, he suffered a psychotic episode and saw a counsellor.

Mr Caseby, from Blackheath, London, told Birmingham's Coroner's Court: "We cannot understand how a young man like Matthew slipped through the fingers of his warm and loving family". He said his son never took drugs, smoked, or even drank.

Matthew had been living at home whilst building a personal training business and began to have counselling in late 2018. In summer 2020, his parents moved to their holiday home in Suffolk to give him some privacy. Later that year, police were alerted when he was seen running on railway lines in Islip, near oxford. He was then detained and sectioned under the Mental Health Act and was sent to Priory Woodbourne as an NHS patient.

Four days after being detained, Matthew disappeared. His father drove to Birmingham to search for him and handed out 'missing' posters to the public. At 9am on September 8th, Mr Caseby met Matthew's consultant psychiatrist Arshad Mahmood at the Priory. Mr Mahmood assured him that his son was 'a low suicide risk' but later discovered Matthew was already dead.