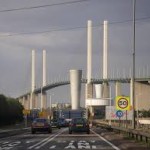 Vishal Randive, a former JP Morgan computer engineer falsely stated that a minor crash gave him severe whiplash has been told to pay £48,000 in court costs.
In an insurance claim he claimed he suffered severe whiplash after a car 'rolled forward' and bumped into him while queueing at a toll booth station at the Dartford Tunnel in August 2013. He stated that his injury had made an existing back problem worse.
The 39-year-old software engineer put in a claim against Aviva insurance that included £7,200 for loss of earnings – the equivalent of 16 days' work – plus £2,080 for personal training sessions, £720 physiotherapy costs and £200 travel expenses.
But Avia found he was already off sick at the time and when confronted with the findings he discontinued his claim. Aviva asked solicitors to peruse a 'dishonesty claim' in view of the way he presented his case.
Randive pleaded guilty after a three-year court battle and was ordered to pay a further £40,000 in court costs on top of an initial order for £8,200 defence costs.
A spokesman for Horwich Farrelly said: "His GP records proved that he was not working at the time of the incident.
"Rather than needing to take time off work as a result of the accident, he was in fact already off work due to a previous back injury.
"Mr Randive's medical records showed he was working out in the gym during his supposed injury period, and when he visited his GP shortly after the accident he did not mention the incident."
If you require specialist legal advice on a similar matter contact our team of expert injury lawyers on 0121 355 4700