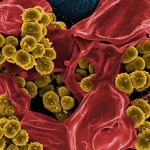 A recent report has revealed that meat sold in Sainsbury's and Asda has tested positive for the deadly "superbug" MRSA.

The test, which was commissioned by the Alliance to Save Our Antibiotics, Compassion In World Farming, and Sustain, analysed 97 UK-produced pork products available in British supermarkets.

Two samples of minced pork from Asda and one from Sainsbury's were found to contain the livestock strain of MRSA, which can cause serious and potentially deadly infections in humans.

Experts claim that the finding does not pose a significant risk to the public so long as the meat is cooked thoroughly and good hygiene practices are followed.

Emma Rose, from the Alliance to Save Our Antibiotics, told the Guardian newspaper:

"It is extremely worrying to find LA (livestock associated)-MRSA in British-produced pork.

"LA-MRSA is able to cause serious and potentially fatal infections in humans, and as the bacteria is resistant to antibiotics, it is extremely difficult to treat.

"What's more, even more dangerous variations are emerging as the superbug evolves."

A spokeswoman for Sainsbury's added that LA-MRSA is "uncommon" in British pork, and "through basic kitchen hygiene and thoroughly cooking meat, any food safety issue is removed."

If your health has suffered because of a defective, faulty, or dangerous product, you may be entitled to compensation. Call our team on 0121 355 4700 to discuss your circumstances.