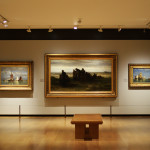 A guide at the National Gallery who was asked to wear a badge showing that she spoke Arabic sued her employers for race discrimination.
An employment tribunal heard that Dana El Farra took offence after bosses suggested she wore a badge containing a Kuwaiti flag to identify her "mother tongue with the appropriate flag."
The British national claimed the request was "racially motivated", said her only link to Kuwait was that her parents once worked there and added that, compared with Spanish and Italian colleagues, she was unfairly treated.
Ms El Farra was employed as a visitor engagement assistant by Securitas in March 2018. Her duties at the National Gallery included providing visitor information, scanning and selling tickets, and working in the cloakroom. She resigned in 2019.
The hearing was told that on one occasion, after Ms El Farra put her coat and bag on a bench beside her, a manager had asked: "What is this you are opening here, a market?". She argued the market reference was a "scathing stereotype about Arab culture"
However, the tribunal dismissed her claims of race discrimination, ruled that the badge request was not racist, and that the other comments did not create a "humiliating or offensive environment" for her. Employment judge Frances Spencer said - that although Ms El Farra was "sensitive" about questions relating to her ethnicity - the remarks directed at her did not meet the threshold of violating her dignity. The judge said: "That is not a criticism. She is British and such questions can indeed be offensive", and added: "These questions need to be looked at in the context of [Securitas's] workplace, where employees were drawn from all over the world and may be regarded as attempts to get to know each other."