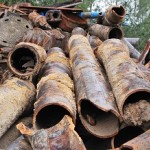 Five workers who died when a wall collapsed at a Birmingham recycling plant were identified through their fingerprints, inquests have heard.

The men were working at Hawkeswood Metal in Nechells when a 15ft wall of concrete and scrap metal fell on them, on July 7. It took emergency crews around 24 hours to recover the bodies.

A coroner opened and adjourned the inquests, due to the "very complex investigation." No date has yet been set for the inquests to resume.

Mr Diaby was from Senegal, while the other four men were of Gambian origin.

A sixth man who suffered a broken leg in the incident has since been discharged from hospital.

An investigation into whether there is criminal liability is still taking place, the coroner heard. West Midlands Police and the Health and Safety Executive are leading the investigation, with 20 detectives working on the case.

If you have been injured in an accident at work, speak to our claims team for legal advice. Call us in complete confidence on 0121 355 4700 today.