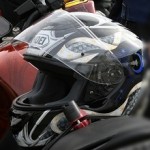 Shocking secret footage has emerged of the Halloween biker rampage that bought chaos to the streets of Birmingham.

The footage, apparently filmed by those on the bikes, shows just how dangerous some of the bikers' actions were.

One rider is seen driving down the wrong side of the road, weaving around cars while performing stunts. Meanwhile a quad biker can be seen standing up and dancing while performing wheelies.

The gang of around 200 bikers – many of whom were wearing masks – also attacked a police van, hurled fireworks at motorists, and prevented a fire engine from attending an emergency.

"It is very difficult to plan for outbursts like this: it's not a conventional, planned event and we saw small groups of bikers speeding off in all directions. It is very hard for officers to try and contain that activity.

"Stingers were used where appropriate to deflate bike tyres and to disrupt the activity – but this can only be done in certain circumstances where it would not endanger the rider of the deploying officer. Most of the bikers were not wearing helmets so this presents additional risks."

If you have been injured on the roads and somebody else's reckless driving was to blame, you may be owed compensation. Call our claims team on 0121 355 4700 to discuss your circumstances.