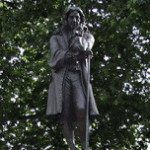 New laws to protect statues from so called baying mobs

Tough new laws outlined by the Communities Secretary could see every statue given greater protection from "baying mobs" and road names saved from the "revisionist purge" of Labour councils.
Robert Jenrick is to change the law so that, without going through a formal planning process, historic statues, plaques, memorials or monuments cannot be removed. Mr Jenrick is also looking at ways to stop Left-wing councils from unilaterally replacing street names linked to the British Empire, without the approval of a clear majority of people living in the streets affected.
Writing in a national broadsheet, Mr Jenrick said it was wrong that statues were being removed "at the hand of the flash mob, or by the decree of a 'cultural committee' of town hall militants and woke worthies".
He added: "We live in a country that believes in the rule of law, but when it comes to protecting our heritage, due process has been overridden. That can't be right. Local people should have the chance to be consulted whether a monument should stand or not. What has stood for generations should be considered thoughtfully, not removed on a whim or at the behest of a baying mob."
Five pieces of legislation and regulations will have to be amended for the changes to be made. Set to apply from March, the change in the law will give local people a say over the removal of statues, guided by planning inspectors, with the secretary of state having the power to veto controversial decisions. Statues torn down by mobs would have to be reinstated by councils. The protections will apply to all 12,000 statues in England, of which around 3,400 are listed. The Government said that there is no estimate of how many are "under threat",
Mr Jenrick added: "I am changing the law to protect historic monuments and ensure we don't repeat the errors of previous generations. Proper process will now be required. "Any decisions to remove these heritage assets will require planning permission and councils will need to do so in accordance with their constitution, after consultation with the local community. Where that does not happen, I will not hesitate to use my powers as secretary of state in relation to applications and appeals involving historic monuments where such action is necessary to reflect the Government's planning policies."
Mr Jenrick also spoke out against at councils that unilaterally changed street names because they had fallen foul of modern-day sentiment. One idea is only to allow a name change if a "super majority" of households in the street is in favour. For example, Lambeth Council has suggested that Nelson's Row may need to be renamed, and Birmingham City Council has been naming new streets "Diversity Grove" and "Humanity Close".
Mr Jenrick said: "Residents face the inconvenience (and embarrassment) of their addresses being forcibly changed. We cannot, and should not, try to edit or censor our past. At the heart of liberal democracies is a belief that history should be studied, not censored. We should apply the same scorn to the mindless destruction of statues as to the burning of books that we disagree with."
Speaking of some of the now-controversial statues, Mr Jenrick said: "Our view will be set out in law, that such monuments are almost always best explained and contextualised, not taken and hidden away", and added: "Many of these statues were put up by previous generations, sometimes with different understandings of right and wrong. To tear them down is, as the Prime Minister has said, 'to lie about our history'. It is also to needlessly denigrate and distort our past, rather than to educate, inform and unite people."