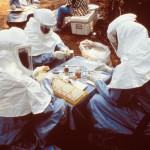 A nurse in Spain has been tested for the Ebola Virus and her results have come back positive. She is thought to be the first person who has contracted the virus outside of West Africa.

The nurse was part of a team taking care of 69 year old Manuel Garcia Viejo who contracted Ebola but died four days after being brought to Madrid's Carlos III hospital.

On Thursday night the health authorities stated the nurse was in a stable condition.

On 30 September she had alerted them to a slight fever and by Sunday she checked into a hospital in Alcorcon as her fever worsened.

The Ebola protocol was activated at the hospital and both initial tests for the virus were positive.

Antonio Alemany, of the Madrid regional government, said the nurse who is married without children started to show symptoms while on holiday. He continued to say, "We're drawing up a list of all the people she could have been in contact with, including the health professionals at Alcorcon hospital.

He told Guardian readers more than 30 people were being carefully monitored for any sign of symptoms.

Health professionals said the nurse would have only entered the infected room twice with full protective equipment. Alemany, said, 'We don't know yet what failed."

If you are seeking legal advice, please do not hesitate to contact our Birmingham Solicitors on 0845 603 0708 or email info@activelegal.co.uk.