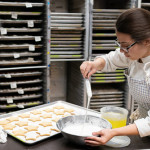 A former pastry chef for Heston Blumenthal has claimed that she has been left suffering from repetitive strain injury after being forced to make 550 whisky wine gums a day at his Fat Duck restaurant.

Sarah Anderson, from Donegal in Ireland, worked at the three-Michelin star restaurant between 2014 and 2015, and is suing the Fat Duck for £200,000 over claims she can no longer properly drive, cook, or lift heavy objects due to "significant wrist pain".

Lawyers for Ms Anderson told the High Court that she was effectively working on a factory floor performing "fast, arduous and repetitive" tasks. Her daily workload included racing against time to make chocolate playing cards before they set too hard, hand-crafting 550 whisky wine gums, and putting 400 sweets into small bags using tweezers.

Fat Duck Ltd argues that the workload and tasks she performed were routine for a pastry chef in a "fine-dining restaurant" and that she was given sufficient breaks. The restaurant has denied liability for Ms Anderson's injury. Lawyers for the restaurant also say there is a stark lack of medical evidence provided by Ms Anderson for her injury, they maintain that her workload was not oppressive and that she was given all the support and assistance she needed.

Heston Blumenthal opened the Fat Duck in Bray, Berkshire, in 1994 and carved out a reputation for eccentric and unusual-sounding dishes such as snail porridge and bacon and eggs ice cream. The following decade proved a huge success for the restaurant, by 2004 the Fat Duck had won three Michelin stars, and the following year was voted the world's best restaurant.

In June 2015 Ms Anderson began complaining of pain in her forearm, and was told by her physiotherapist that it was being caused by her "long hours and repetitive work". In November 2015 she hung up her apron for good.

Judge McCloud adjourned the dispute ahead of a trial of her claim for compensation.