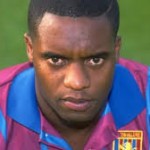 A Judge at Birmingham Crown Court has overturned a Contempt of Court Order which protected the identity of two police officers who have been charged with the murder of ex-Aston Villa football, Dalian Atkinson.
Mr Atkinson played for Ipswich and Sheffield Wednesday.  He died shortly after being tasered  outside his father's home in Telford.   It is claimed by the former Premier League Star's family that the device was deployed at least three times.
The IPCC placed both officers under criminal investigation just days after the tragedy occurred and after an interview under caution they were also served with notices for Gross Misconduct.
West Mercia Police Constables Benjamin Monk and Mary Ellen Bettley-Smith were both present at the hearing and their legal representatives argued that anonymity could not be justified and requested their addresses not be revealed in any media reports.  On Thursday, a further hearing will be held to deal with this matter separately.
The CPS announced their charging decision last Thursday, just before the officers appeared at Birmingham Magistrates Court.
PC Benjamin Monk faces an accusation of murder with an alternate charge of manslaughter, whilst PC Mary Bettley-Smith is accused of causing actual bodily harm (ABH).
The case continues.
Should you wish to discuss your legal rights please do not hesitate to contact us.