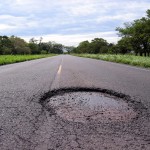 Pothole Claims on The Rise

Figures released from the RAC this month show that potholes on our roads are costing the motorist a staggering £100 million in repair bills.

With over 28,000 call outs to the motoring organisation in 2013 for pot hole related accidents alone, the nation's roads are hitting drivers hard in the pocket.

With the worst hit areas being the south-west of England, holes on the highways look set to cost councils in Devon and Cornwall over £1 billion to repair.

As Kent council chiefs have drafted in extra staff to fix the ailing roads, experts blame the heavy rainfall over the recent months for the damage caused with others citing years of under-investment by the councils.

Huge expanses of the south-west are still submerged by flood water and local councils are bracing themselves for hundreds more potholes once the waters have receded.  The Department of Transport claim that spending on potholes tops £3 billion nationally with that figure expected to rise in 2014.

The cost of compensation claims related to potholes exceeds the £30 million mark as local authorities are forced to pay out for poorly maintained roads.  For motorists who have been unfortunate to hit a pothole, common vehicle damage can be costly axle and suspension failure.

Often, for the driver and passengers the jolt can also result in whiplash and other related injuries inflating the cost of claims even further.

If you do hit a pothole in the road either in a motor vehicle, or as a cyclist the important thing is to gather evidence in case you need to make a claim.

The legal advice is to ensure you take photographs of the hole and surrounding area if it is safe to do so.  Keep subsequent repair bills and details of medical expenses incurred and report the pothole as soon as possible to the local authority before consulting a solicitor.

If you would like to speak to a solicitor about a pothole related accident or have a question regarding the above please call our Birmingham team on 0121 355 4700 or email info@activelegal.co.uk today.