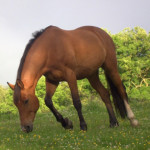 A rider who suffered crush injuries has lost a £100,000 claim against the owner of a "naughty" horse after a judge ruled the animal may have suffered a heart attack.
Lisa Ford suffered multiple fractures, including a smashed pelvis and internal injuries, when the horse reared up and fell backwards on to her while she was riding on the Badminton Estate with the Beaufort Hunt in September 2018.
41-year-old Ms Ford, a groom, sued her former employer and the horse's owner, 65-year-old Jonathan Seymour-Williams, under the Animals Act 1971, claiming that the horse, named Tommy, was "triggered" by "disobedience" into performing the dangerous act of rearing.
She claimed Tommy, an experienced hunter which Ms Ford cared for and regularly rode, reared because he was "a hot horse" who was "being naughty", and insisted Mr Seymour-Williams should pay damages for her injuries as she had been riding Tommy as part of her job to prepare the horse for his son and daughter to ride out hunting.
However at London's High Court Judge Michael Kent QC, while agreeing she was working at the time of the accident, threw her case out and ruled that Tommy probably reared because it "suffered some catastrophic internal, probably cardiovascular, failure" and that her employer could not have been expected to plan for such a freak mishap.
Whilst giving his judgment, he said Ms Ford was a "very experienced horsewoman" who had been riding since she was seven. Describing the accident, he added: "After trotting into a field, Tommy suddenly stopped, stepping back or sideways but not going forward. The claimant was encouraging him to move on with her legs and through the reins as well as with a light slap on the shoulder with a riding crop. He then reared up to such an extent that he fell over backwards landing on top of the claimant."
Ms Ford remained trapped under the horse while it thrashed around. A "very experienced horseman", Richard Iddon, came to help and said he thought the horse was "having a heart attack", the judge said. Tommy died around six minutes later.
The judge concluded that, "in the circumstances, although the claimant was acting in the course of her employment at the time of the accident, my findings do not enable her to satisfy the requirements of section 2 of the Animals Act 1971 so as to impose strict liability on the defendant for her injuries and for that reason the claim fails," the judge concluded.