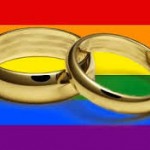 Tweeting on Saturday, 'Congratulations to all same-sex couples getting married today – I wish you every possible happiness for the future'.

The Marriage (same sex) Couples Act was introduced on 29th March as the Prime Minister claimed that the coalition government had Britain's proud traditions of respect, tolerance and equal worth" when the change in the law began.

The multi coloured rainbow flag which symbolises the gay community was raised above the cabinet office as the law came into force at midnight, heralding the legalisation of gay marriage in England and Wales.

As gay couples queued up to get married at the stroke of midnight, eager to win the title of the first to marry in the historic landmark ceremony, the Archbishop of Canterbury, Justin Welby added "The Church of England will no longer campaign against the new law".

Amongst the high profile celebrity couples enjoying the special moment were comedian Sandi Toksvig and her partner Debbie who renewed their wedding vows in front of more than 2,000 guests.

When they entered into a Civil Partnership seven years ago, Sandi admits that she didn't' expect to see the change in the law in her lifetime.

As the couple exchanged their vows in front of friends and members of the public at London's Royal Festival Hall, the Government plans that Civil Partnerships will be converted to formal marriages by the end of this year.

David Cameron expressed his delight at the new law, saying, "In Britain it will no longer matter whether you are straight or gay – the state will recognise your relationship as equal".

If you need to speak to our Birmingham solicitors about any aspect of Family Law please call us on 0121 355 4700 or email info@activelegal.co.uk today.