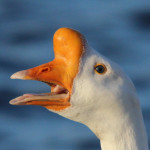 A Birmingham council worker was sacked after a tribunal rejected his "implausible story" that the noises from a pornography video, accidentally played in a meeting, were made by a goose.
An electrician for Redditch Borough Council opened a WhatsApp message containing footage of a woman loudly making "sexual moans" during a meeting. An employment tribunal in Birmingham heard that the noise lasted for around 30 seconds, causing staff to break out into awkward laughter, and leaving 100 of his colleagues stunned.
The electrician opted to create an "implausible story" when confronted by managers claiming the noises had been courtesy of a video in which a "goose was honking".
He further stated to his colleagues that the phone belonged to his wife, who was sick and off work, and that he had only used it at the end of the meeting to check if she had messaged him. He added that geese had been gathering near his recently bought house as it was next to a trout pool. Further comment was made that the WhatsApp message was meant to be a "joke" sent to his wife by a male friend.
However, the tribunal heard that onlookers saw the electrician "frantically" tapping on his mobile and deleting the X-rated video.
He was subsequently sacked and then sued the council after the incident in January 2019 claiming he had been a victim of unfair dismissal and breach of contract.
Ruling that "on the balance of probabilities" the sounds were of a sexual nature and not of a goose, the tribunal dismissed his claims.