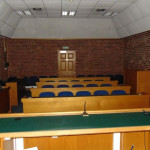 A 16-year-old apprentice is thought to be the youngest ever employee to win an age discrimination case after being branded "immature" by his boss.
Callum Graham was offered a job as an apprentice joiner with Newcastle company MHD Builders. The post was for two years and included one day a week release to attend a college course. Mr Graham, who was represented in court by his father, Mark, had accepted the job offer in writing and verbally, and turned down other job offers to take the apprenticeship. Two months later the teenager was still waiting to start the rolel, only to be then told that the firm had lost a contract and would not be able to take him on.
Mr Graham sought legal advice and emailed the co-owner of MHD, Gareth Hynes, to say he would take the company to an employment tribunal. Mr Hynes wrote back to him, claiming the teenager had "a lot of maturing up to do", that he had never signed a contract, and threatened to ruin his name in the trade.
Employment Judge Seamus Sweeney awarded Mr Graham £7,908 for breach of contract and age discrimination. In his ruling, Judge Sweeney said: "The email is a nasty threat to scupper the claimant's opportunities by blackening his name among businesses in the industry in which he sought to work."
Judge Sweeney said Mr Hynes was influenced by the claimant's youth and added: "I infer he would not make this particular threat to an older person – whether a job applicant or employee. It is clear from the email that Mr Hynes was trying to teach the claimant a bit of a lesson.  "He treated the claimant less favourably because of his age. In doing so, he subjected him to a detriment."
The firm was ordered to pay Mr Graham £5,408 in lost earnings, and further £2,500 was awarded to him for age discrimination, for which MHD and Mr Hynes are jointly responsible.
Active Legal