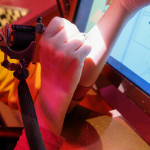 Under new restrictions on potentially harmful chemicals, blue and green tattoos could be outlawed in the EU.
The European Commission introduced rules banning more than 4,000 substances in inks amid fears they can cause cancer or other illnesses; the EU said many of the chemicals in tattoo inks are "carcinogenic, mutagenic and reprotoxic". Tattoo artists across the EU now fear the diktat could shut their parlours while suppliers look for alternative inks that are compliant with the chemical legislation. Others fear the rules could spell the end for green and blue tattoos because there are no immediate replacements.
Duck Art Tattoo in Mechelen, Belgium, has already had to turn customers away because of shortages caused by the change. Marjolein Petit, who works at the company, said "It's hitting like a bomb. Lots of people were aware it was coming but they didn't know that the impact on the tattoo industry was this big. Tattoo artists are worried about their future and that of their businesses."
The EU said laws were needed because 12 per cent of Europeans have tattoos. However, Ms Petit said the changes could force the industry underground and away from regulators, in a much bigger danger to public health. "We already see lots of tattooists going to work behind closed doors and shutting their parlours," she said.
Amsterdam-based tattoo artist Tycho Veldhoen, who has plied his trade for 25 years, said the ban would have an "enormous impact" on his work. He warned that the Covid-stricken industry would face more misery next year when more inks could be banned. "It's all rather sudden," he said. "There should have been more preparation." Eurocrats argue that alternatives exist, and have given tattoo artists and suppliers until next year to find replacements for green and blue. Suppliers, however, say the products are too slow getting from manufacturers to shops.
Brussels said consultation began in 2016 and the regulation was made public in December. The EC said: "This is not something which is a surprise or a complete novelty. It is a sort of generalisation of practice which is already existing in quite a few member states."
In Britain, Defra said: "The Government has asked the Health and Safety Executive to review the risk posed by certain substances in tattoo inks."