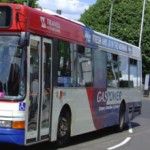 A pedestrian has suffered serious head and pelvic injuries after being struck by a bus in a West Midlands town centre this month.


The woman, believed to be in her mid-thirties, was hit by a single-deck bus in the middle of West Bromwich town centre on the morning of 6th July, 2015, close to The Public building. Several roads had to be closed off in the town centre while crew from the Midlands Air Ambulance arrived to treat the woman.


A spokesman from the West Midlands Ambulance Service said:


"Crews arrived to find a woman who had been in collision with a single deck bus.


"The woman, believed to be in her mid 30s, had suffered a serious head injury and suspected pelvic injuries.


"She received emergency treatment at the scene by medics for her injuries including treatment for her reduced level of consciousness."


Once the attending medics were able to stabilise the woman's condition, she was transported by the land ambulance to Queen Elizabeth Hospital in Birmingham. Fortunately, she didn't suffer more serious injuries despite the severity of the incident.