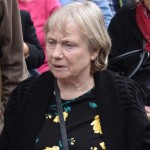 A great-grandmother has been cleared of murder 18 months after surviving a failed double suicide pact with her husband.
Mavis Eccleston, 80, was acquitted of murdering Dennis Eccleston, 81. After speaking about her suicide pact and traumatic treatment after being arrested she explained that her husband of 60 years told her almost 5 years ago that he wanted to end his life rather than suffer from his worsening bowel cancer.
Mavis told her husband 'If that's the way you are going then I am coming too'. Early last year, the pair took an overdose of prescription drugs together, however Mavis survived the suicide attempt.
In interviews, Mavis explained that when she realised that she hadn't died, she felt 'very annoyed'. She was also left in tears when a nurse told her, 'We have got to wait for the police because you have murdered your husband and you are going to prison for a long, long time.'
After being arrested, the widow was kept in a cell for 30 hours dressed only in her nightie, slippers and dressing gown.
Described as a 'mercy killing', the widow said she would 'do it all again today' if he asked her to, despite being locked in a cell for 30 hours and being called a murderer by other hospital patients. She added: 'I wanted to be with my husband. You wouldn't let an animal suffer the way Dennis was suffering.'
Defence lawyers argued that Mavis could not have given Dennis a lethal dose of drugs without him knowing as it would have had a bitter taste. The court heard that Mr Eccleston "more or less begged" for his wife's help to end his life and had given her instructions how to do so. The widow also explained that as she gave him the drugs, a tear rolled down his face. She said: 'It means he could hear me.'
Earlier this month, the jury unanimously acquitted Mavis of both murder and manslaughter.
Should you wish to discuss your legal rights please do not hesitate to contact us.
Active Legal