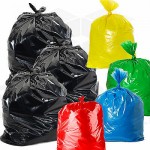 A woman was arrested after being accused of putting her rubbish in the wrong coloured bin bags.
Lyndsey Webb, 34, was arrested and taken to a police cell by two officers after she was caught dumping household waste in black bags instead of orange-coloured ones.
Ms Webb, a mother from Ipswich, gave evidence via a video link from her cell and argued that the council failed to send her new orange bin bags following new recycling rules which had been implemented.
She claimed that she was given permission by Ipswich Borough Council to put her waste in black bin bags when she had not been issued with orange and clear ones in time.
The court heard that Ms Webb was part of a small group of residents who were allowed to put their waste in black bin bags outside their properties if they did not have space for wheelie bins.
However the magistrates were told that this no longer applied as new recycling rules were implemented which included issuing residents with orange and clear bin bags to encourage recycling.
Prosecutors also argued that Ms Webb was captured on CCTV dumping black bags on three separate occasions late at night.
She was initially summoned to appear at Suffolk magistrates for four fly tipping offences - which she failed to attend. Following this, a warrant was issued for her arrest.
A council spokesman argued: "She was dumping a large quantity of bags outside a shop in an alleyway… She was arrested under warrant because of her failure to attend court."
Ms Webb was eventually given a conditional discharge and ordered to pay £50 in compensation.
After the hearing, Ms Webb said: "All I did was get the colour of my rubbish bags wrong and I've suddenly got two police officers at my door arresting me in front of my kids. It's ridiculous."
Should you wish to discuss your legal rights please do not hesitate to contact us.
Active Legal
Birmingham
0121 355 4700